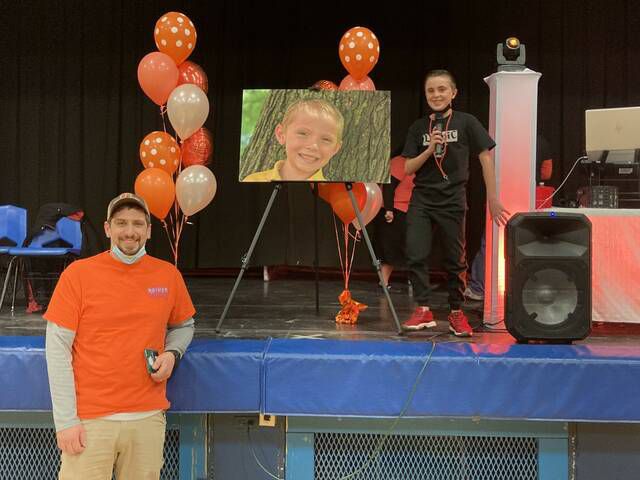 KINGSTON — The outpouring of love and support for the family of Nathan Gray, the eight-year-old Wilkes-Barre boy who died earlier this month, continued Saturday night with a basketball night designed to raise funds for the family.

The Good Shepherd Academy hosted the seventh and eighth grade basketball teams from St. Nicholas St. Mary’s, the school where Nathan was a student, for a series of exhibition games with contests and raffle prizes mixed in .

The Good Shepherd gymnasium, normally decorated in the school’s blue and gold, was a sea of ​​bright orange on Saturday night in honor of Nathan, who died on January 6 after a long and courageous battle with a rare form of kidney cancer.

Known across the region as ‘Nathan the Superhero’, Gray’s fight, detailed on his own Facebook page, has inspired countless people over the years, which was evident by the size of the crowd. inside the gym on Saturday night.

“When you say Nathan’s name, everyone wants to get involved and participate,” said Dennis Isaacs, head basketball coach and athletic director of St. Nicholas St. Mary’s.

“Our kids were confined and not playing basketball so we decided to do this event for Nathan…I couldn’t believe how much he had been through, he was a true warrior.”

Nathan meant so much to the community that even schools considered rivals like Good Shepherd and St. Nicholas St. Mary’s could come together to pay their respects.

“It used to be a bit of a rivalry between these two schools, it’s a lot friendlier now,” Isaacs said. “We all wanted to come together for Nathan and his family.”

The night’s festivities featured four games between the two schools, with the seventh and eighth grade boys and girls team taking the stage.

In between the action, a three-point competition between the players and a free-throw contest featuring two lucky crowd members took place. Proceeds from all raffles, concessions and the price of admission will go to Nathan’s family to help with funeral costs.

By a fitting coincidence, one of the crowd members who was chosen for the free-throw contest? Nathan’s father, Jeff.

When asked if he thought his son helped him shoot straight, he laughed and said he thought Nathan would take a different approach.

“He would laugh at all the shots I missed.”